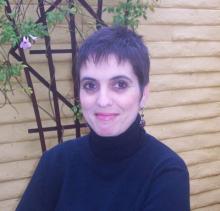 Aliki Dragona received her Bachelor's degree in
English at the University of Athens in Greece. In 1984 she came to the
United States and enrolled at the State University of New York at
Binghamton where she earned both her Master's and Ph.D. While at SUNY,
she attended CRIT/TRIP and was certified as a literary translator of
Modern Greek. Since 1990, Dr. Dragona has taught a diverse range of
composition courses at UC Davis for both the lower and upper division:
UWP 1 and English 3 (Freshman Composition); UWP 102 (Writing in the
Disciplines); UWP 104 (Writing in the Professions); UWP 101 (Advanced
Composition). In 1992 - 94 and while on leave in Greece, Dr. Dragona
taught composition and literature courses at Deree College, the
American College of Greece, before resuming her current position at UC
Davis in 1994. Every summer since 2002, Dr. Dragona has been teaching a
Summer Sessions Abroad program, "Travelers in Greece."