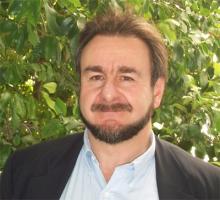 Steve Magagnini has taught journalism to college
students and professionals since 1988, and thanks his students for
making him a better, more evolved person. He's been a working
journalist since he was a cub reporter on the St. Petersburg Times in
1976. He's covered race and ethnicity for The Sacramento Bee since
1994, and been honored for Distinguished Diversity Writing by the
American Society of Newspaper Editors (ASNE) in 2001 and 2002. His work
appears in the anthologies "Best Newspaper Writing 2001" and "Best
Newspaper Writing 2002". He was awarded a Stanford Knight Fellowship in
2001-2002.

In 2001, the Columbia Journalism School gave him a Lifetime Achievement
Award for "Outstanding Coverage of Race and Ethnicity in America."
Arlene Morgan, director of Columbia's race project, called him one of
the finest teachers of beat reporting in the country. He has twice
taught at Columbia's race and ethnicity workshop, and in 1999 taught
"Writing and Reporting the Untold Story" at the Poynter Institute in
St. Petersburg, Fla. In 2002, he taught at a Pew Foundation Workshop on
Race Reporting. He has twice taught "Telling Compelling Untold Stories"
for the American Press Institute, and been a guest lecturer at numerous
colleges and universities, including Stanford, LSU, and UC Berkeley. In
June 2002, he was invited to Indiana University's Graduate School of
Journalism to help 16 journalism professors from around the country
teach diversity reporting to their students, and spoke on
cross-cultural investigations to the 30th anniversary of the Jefferson
Fellows in Asian Studies. He's taught professional newswriting at UC
Davis since 1999. In 2003, he became the first faculty adviser in the
history of the UC Davis California Aggie student newspaper. His
students have gone on to journalism school at Columbia and Berkeley,
and to reporting jobs at The Sacramento Bee, Christian Science Monitor
and other daily newspapers. He also serves as a mentor editor in the
Racial Justice and Journalism and Health Journalism Fellowships at USC
Annenberg School of Communication.