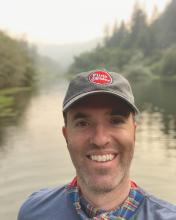 Joe Horton teaches advanced composition, environmental writing, business writing, journalism, fiction, and film courses in the University Writing Program and English Department. He is formerly interim director of the English Department Writing Program at the University of Michigan. He is a graduate of the Zell Writers' Program, and his recent fiction and nonfiction has appeared with Ploughshares, Hobart, Midwestern Gothic, the Colorado Review and TIME magazine. He is also playwright-in-residence with Savio(u)r Theatre Company, and his plays have been nominated for six Off West End Awards in London, including Best New Play. He worked previously for the national nightly broadcast of the PBS NewsHour and in the London office of Ketchum/Pleon PR and communications.

He regularly collaborates with the faculty and students of Dine' College on the Navajo Nation:

Salutatorian of the University of Southern California, Phi Beta Kappa (2007)