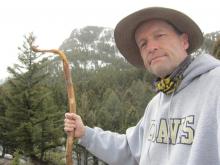 Scott Herring grew up in Burbank, California, near the center of metropolitan Los Angeles. After finishing his BA, he faced a crisis. Having discovered maybe ten years earlier that he did not really like being near the center of greater LA, and having let the problem fester, he fled to Yellowstone National Park, where he spent five years living and working at Old Faithful and elsewhere.

Calmer now, he returned to civilization to complete both an MA and Ph.D. in English, writing his dissertation on literature about the national parks. He has made an academic specialty not just of the national parks, but of all writing on the natural world: he published his dissertation in 2004, under the title Lines on the Land: Writers, Art, and the National Parks. He followed this effort with a book about West Coast waterfowl (Opening Days, 2006), and a book about the history of Yellowstone (Rough Trip Through Yellowstone, 2014). At UC Davis, he has specialized in teaching UWP 104D, 104E, and 102B, and especially enjoys UWP 104F, Writing in the Professions: Health. In 2013, he won the Academic Federation Award for Excellence in Teaching, so he must be doing something right.