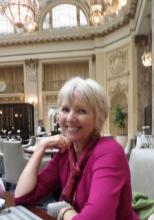 Elizabeth Davis, a long time lecturer in the University Writing Program, has taught upper- and lower-division courses, ranging from freshman basic skills to advanced composition and writing in the professions (journalism, education, sociology).  She also taught courses in The Short Story, the Literature of California, British Romanticism, and The English Novel in the English Department.  In addition to teaching fiction and creative non-fiction classes, Dr. Davis developed and directed the Summer Institute of the Literature of Northern California, an award-winning program, sponsored by UCD Summer Sessions. She has served as a mentor teacher, and taught graduate studies seminars in teaching.   She has worked as an Educational Testing Service Reader for several California state-wide exams. Dr. Davis received the Academic Federation Excellence in Teaching Award, June 2008.

Dr. Davis is also a fiction writer, essayist, poet, and reviewer.  Her work has appeared in numerous journals and newspapers, including The Malahat Review, Primavera, The Short Story Review, The Journal of the West, The San Francisco Chronicle, Writing on the Edge, and Christianity and Literature.  She received a Writer-in-Residence appointment at Cottages at Hedgebrook, Langley, WA.  Before coming to the Davis campus, she worked as a reporter for the Champaign-Urbana News Gazette, and later, as a staff wriiter for Jet Magazine in Chicago. She has also taught fiction and creative non-fiction classes at UCBerkeley Extension. She continues to teach UC Davis summer classes. During the academic year, Elizabeth serves as a writer-coach with the WriterCoach Connection, an organization devoted to students' success in writing.  In a one-to-one setting, volunteer coaches regularly coach 2,000 high school and middle school students in four East Bay school districts.

“Jane on the Brain” in Cocktails with Miss Austen:  Conversations on the World’s Most Beloved Author, Ben Bulben Press, 2017.