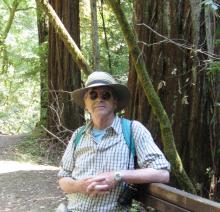 Donald Johns received a BA and an MA from San Francisco State College and a PhD from the University of California, San Diego, all in English and American Literature. From 1983 to 2010, he worked as a lecturer in the Department of English and the University Writing Program at UC Davis.

General writing courses included expository writing, advanced composition, and style in the essay. In the Writing in the Professions sequence, he taught writing in law, in journalism, and in education. Other advanced composition courses were paired with courses in the disciplines: history, philosophy, literature, political science, international relations, environmental studies, animal physiology, and human development.

He also taught introduction to literature and several offerings of English 158B, American Novel Since 1900. For Summer Sessions Abroad, he taught courses in Scottish literature and film in Edinburgh. In addition, for the first-year seminar program he offered courses on Elvis Presley, Robert Burns, and David Brower. For several years, he served as an administrator overseeing lower division writing courses and leading pedagogy seminars for graduate students teaching expository writing and introduction to literature. In 2003, he received the Academic Federation award for excellence in teaching.

Outside work included talks and workshops on critical thinking and civic literacy at the University of California Writing Programs Conference and the International Conference on Critical Thinking at Sonoma State University. For Writing on the Edge, he read manuscripts and interviewed Gary Snyder, Joseph Williams, and Gregory Colomb. He has published articles on various topics including the poetics of Ezra Pound, the music of Professor Longhair, and the rules of golf.